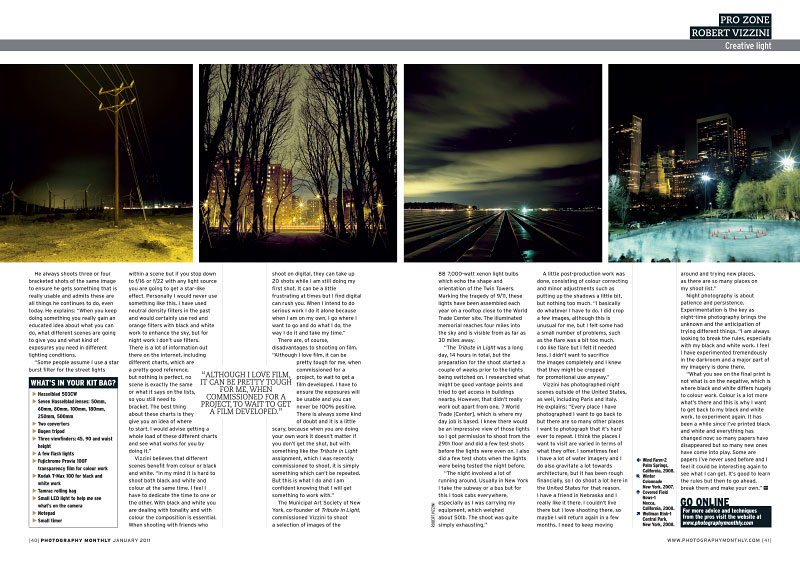 He always shoots three or four bracketed shots of the same image to ensure he gets something that is really usable and admits these are all things he continues to do, even today. He explains: “When you keep doing something you really gain an educated idea about what you can do, what different scenes are going to give you and what kind of exposures you need in different lighting conditions.

“Some people assume I use a star burst filter for the street lights within a scene but if you stop down to f/16 or f/22 with any light source you are going to get a star-like effect. Personally I would never use something like this. I have used neutral density filters in the past and would certainly use red and orange filters with black and white work to enhance the sky, but for night work I don’t use filters. There is a lot of information out there on the internet, including different charts, which are a pretty good reference, but nothing is perfect, no scene is exactly the same or what it says on the lists, so you still need to bracket. The best thing about these charts is they give you an idea of where to start. I would advise getting a whole load of these different charts and see what works for you by doing it.”

Vizzini believes that different scenes benefit from colour or black and white. “In my mind it is hard to shoot both black and white and colour at the same time. I feel I have to dedicate the time to one or the other. With black and white you are dealing with tonality and with colour the composition is essential. When shooting with friends who shoot on digital, they can take up 20 shots while I am still doing my first shot. It can be a little frustrating at times but I find digital can rush you. When I intend to do serious work I do it alone because when I am on my own, I go where I want to go and do what I do, the way I do it and take my time.”

There are, of course, disadvantages to shooting on film. “Although I love film, it can be pretty tough for me, when commissioned for a project, to wait to get a film developed. I have to ensure the exposures will be usable and you can never be 100% positive. There is always some kind of doubt and it is a little scary, because when you are doing your own work it doesn’t matter if you don’t get the shot, but with something like the Tribute in Light assignment, which I was recently commissioned to shoot, it is simply something which can’t be repeated. But this is what I do and I am confident knowing that I will get something to work with.”

The Municipal Art Society of New York, co-founder of Tribute in Light, commissioned Vizzini to shoot a selection of images of the 88 7,000-watt xenon light bulbs which echo the shape and orientation of the Twin Towers. Marking the tragedy of 9/11, these lights have been assembled each year on a rooftop close to the World Trade Center site. The illuminated memorial reaches four miles into the sky and is visible from as far as 30 miles away.

“The Tribute in Light was a long day, 14 hours in total, but the preparation for the shoot started a couple of weeks prior to the lights being switched on. I researched what might be good vantage points and tried to get access in buildings nearby. However, that didn’t really work out apart from one, 7World Trade [Center], which is where my day job is based. I knew there would be an impressive view of those lights so I got permission to shoot from the 29th floor and did a few test shots before the lights were even on. I also did a few test shots when the lights were being tested the night before.

“The night involved a lot of running around. Usually in New York I take the subway or a bus but for this I took cabs everywhere, especially as I was carrying my equipment, which weighed about 50lb. The shoot was quite simply exhausting.”

A little post-production work was done, consisting of colour correcting and minor adjustments such as putting up the shadows a little bit, but nothing too much. “I basically do whatever I have to do. I did crop a few images, although this is unusual for me, but I felt some had a small number of problems, such as the flare was a bit too much. I do like flare but I felt it needed less. I didn’t want to sacrifice the images completely and I knew that they might be cropped for promotional use anyway.”

Vizzini has photographed night scenes outside of the United States, as well, including Paris and Italy. He explains: “Every place I have photographed I want to go back to but there are so many other places I want to photograph that it’s hard ever to repeat. I think the places I want to visit are varied in terms of what they offer. I sometimes feel I have a lot of water imagery and I do also gravitate a lot towards architecture, but it has been rough financially, so I do shoot a lot here in the United States for that reason. I have a friend in Nebraska and I really like it there. I couldn’t live there but I love shooting there, so maybe I will return again in a few months. I need to keep moving around and trying new places, as there are so many places on my shoot list.”

Night photography is about patience and persistence. Experimentation is the key as night-time photography brings the unknown and the anticipation of trying different things. “I am always looking to break the rules, especially with my black and white work. I feel I have experimented tremendously in the darkroom and a major part of my imagery is done there.

“What you see on the final print is not what is on the negative, which is where black and white differs hugely to colour work. Colour is a lot more what’s there and this is why I want to get back to my black and white work, to experiment again. It has been a while since I’ve printed black and white and everything has changed now; so many papers have disappeared but so many new ones have come into play. Some are papers I’ve never used before and I feel it could be interesting again to see what I can get. It’s good to learn the rules but then to go ahead, break them and make your own.” PM