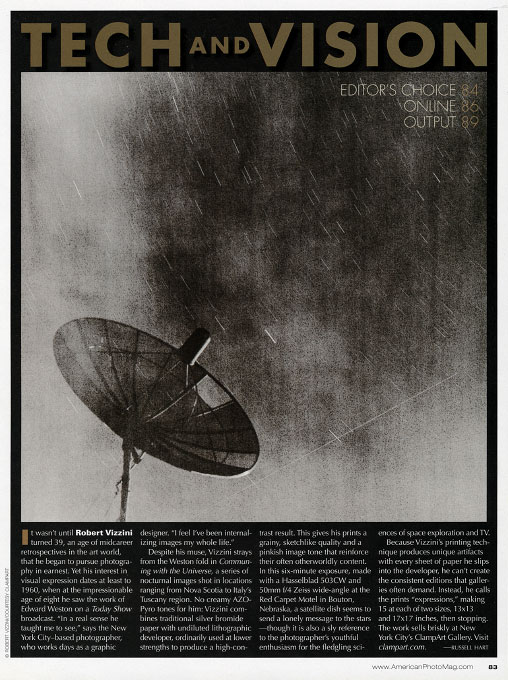 It wasn't until Robert Vizzini turned 39, an age of midcareer retrospectives in the art world, that he began to pursue photography in earnest. Yet his interest in visual expression dates at least to 1960, when at the impressionable age of eight he saw the work of Edward Weston on a Today Show broadcast. “In a real sense he taught me to see,” says the New York City-based photographer, who works days as a graphic designer. “I fell I’ve been internalizing images my whole life.”

Despite his muse, Vizzini strays from the Weston fold in Communing with the Universe, a series of nocturnal images shot in locations ranging from Nova Scotia to Italy’s Tuscany region. No creamy AZO-Pyro tones for him; Vizzini combines traditional silver bromide paper with undiluted lithographic developer, ordinarily used at lower strengths to produce a high-contrast result. This gives his prints a grainy, sketchlike quality and a pinkish image tone the reinforce their often otherworldly content. In this six minute exposure, made with a Hasselblad 503cw and 50mm f/4 Zeiss wideangle at the Red Carpet Motel in Bouton Iowa, a satellite dish seems to ,send a lonely message to the stars, though it is also a sly reference to the photographer’s youthful enthusiasm for the fledgling sciences of space exploration and TV.

Because Vizzini’s printing technique produces unique artifacts with every sheet of paper he slips into the developer, he can’t create the consistant editions that galleries often demand. instead, he call the prints “expressions,” making 15 at each of two sizes, 13 x 13 and 17 x 17 inches, then stopping. The work sells briskly at New York City’s ClampArt Gallery.