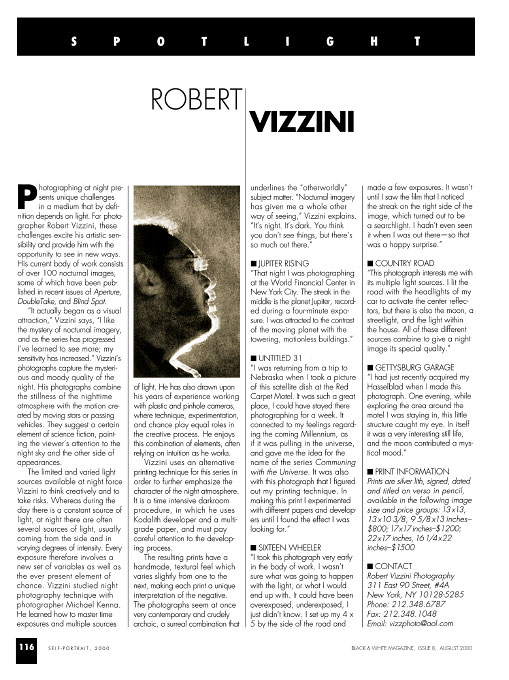 Photographing at night presents unique challenges in a medium that by definition depends on light. For photographer Robert Vizzini, these challenges excite and provide his artistic sensibility and provide him with the opportunity to see in new ways. His current body of work consists of over 100 nocturnal images. Some of which have been published in recent issues of Aperture, DoubleTake, and Blind Spot.

"It actually began as a visual attraction," Vizzini says. "like the mystery of nocturnal imagery, and as the series has progressed I've learned to see more; my sensitivity has increased." Vizzini's photographs capture the mysterious and moody quality of the night. His photographs combine the stillness of the nighttime atmosphere with the motion created by moving stars or passing vehicles. They suggest a certain element of science fiction, pointing the viewer's attention to the night sky and the other side of appearances.

The limited and varied light sources available at night force Vizzini to think creatively and to take risks. Whereas during the day there is a constant source of light, at night there are often several sources of light, usually coming from the side and in varying degrees of intensity. Every exposure therefore involves a new set of variable as well as the ever-present element of chance. Vizzini studied night technique with photographer Michael Kenna. He learned how to master time exposure and multiple sources of light. He has also drawn upon his years of experience working with plastic and pinhole cameras, where technique, experimentation, and chance play equal roles in the creative process. He enjoys this combination of elements, often relying on intuition as he works.

Vizzini uses an alternative printing technique for this series in order to further emphasize the character of the night atmosphere. It is a time intensive darkroom procedure, in which he uses Kodalith developer and a multigrade paper, and must pay careful attention to the developing process.

The resulting prints have a handmade, textural feel which varies slightly from one to the next, making each print a unique interpretation of the negative. The photographs seem at once very contemporary and crudely archaic, a surreal combination that underlines the "otherworldly" subject matter. "Nocturnal imagery has given me a whole other way of seeing," Vizzini explains. "It’s night. It’s dark. You think you don't see things, but there's so much out there."