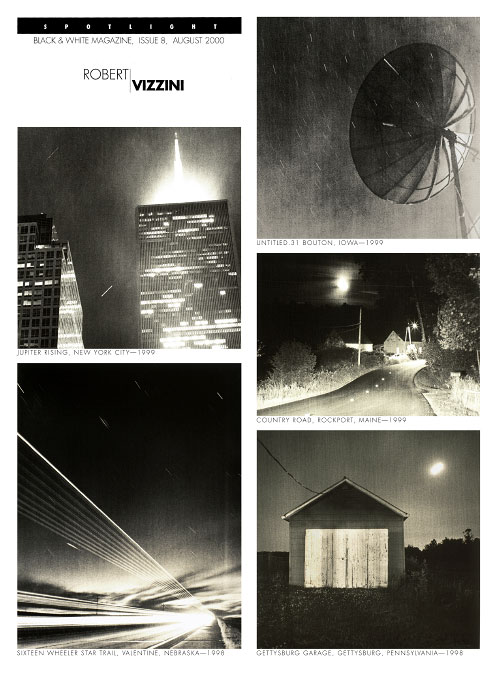 "That night I was photographing at the World Financial Center in New York City. The steak in the middle is the planet Jupiter, recorded during a four-minute exposure. I was attracted to the contrast of the moving planet with the towering, motionless buildings."

"I was returning from a trip to Nebraska when I took a picture of this satellite dish at the Red Carpet Motel. It was such a great place, I could have stayed there photographing for a week. It connected to feelings regarding the coming of the Millennium, as if it was pull in the universe, and gave me the idea for the name of the series Communing with the Universe. It was also with this photograph that I figured out my printing technique. In making this print I experimented with different papers and developers until I found the effect I was looking for."

I took this photograph very early in the body of work. I wasn’t sure what was going to happen with the light, or how I would end up with. It could have been overexposed, underexposed, I just didn’t know. I set up my 4 x 5 by the side of the road and made a few exposures. It wasn't until I saw the film that I noticed the streak on the right side of the image, which turned out to be a searchlight. I hadn't even seen it when I was out there, so that was a happy surprise.

"This photograph interests me with its multiple light sources. I lit the road with the headlights of my car to activate the center reflectors, but there is also the moon, a streetlight, and the light within the house. All of these different sources combine to give a night image its special quality."

"I had just recently acquired my Hasselblad when I made this photograph. One evening, while exploring the area around the motel I was staying in, this little structure caught my eye. In itself it was a very interesting still life. And the moon contributed a mystical mood."